The announcement that Prince George’s County Public Schools (PGCPS) received National recognition for excellence in financial reporting is suspicious ploy. We truly believe it is a clever move to boost Superintendent William Hite’s ego in order to dupe the citizens of Prince George’s County.  Only the devil knows why this information is being released now!  We are sure that Dr. William Hite Jr. and his gang is involved in professional misconduct, corruption and nepotism.  By creating these many clever moves at a time when we are demanding for accountability, he is trying to fool citizens in order to hold on to power. These aspects will never fly with any keen observer.

Financial mismanagement and lack of accountability and transparency has been his trademark to date!  Besides the corruption, many employees, stake holders and citizens of Prince George’s County are astounded by the many lawsuits brought up against the county public schools recently during his tenure. This is unprecedented in the History of PGCPS and it definitely shows there are problems within the school system.  Read the story here by the Gazette Newspaper. Another story here by Washington post.

Anyone who has been following the initial  blog will agree that the second announcement regarding the financial reporting award only came after 7 days after publication of the second blog.  This is problematic for parents who want to see proper reforms and tough changes in the school system in order to support students, teachers and administrators.  Once again, Dr. William Hite Jr. wants to appear that he is doing a good job and that transparency and accountability are not an issue. We disagree with him!  The problems in our school system are manmade.  We demand a reputable external audit to make a proper assessment without any interference from Superintendent Hite and his staff. We have had enough with this PGCPS mess. Superintendent Hite for the most part is either playing golf or is out in the field doing other activities that are unrelated to the education of our children. This is not fair to those who are stakeholders and citizens of Prince George’s County interested in genuine reform.  He is not a good superintendent because he is not doing the job we have hired him to do.  Besides, he likes to cover up corruption! Therefore, he should resign as soon as possible.

Before he begins to resign, a reporter or someone else needs to ask Superintendent Hite’s position on the reasons for introducing a dysfunctional online portal which is not even navigateable for the public to verify school contracts and other tenders online. Why can’t a big school system like PGCPS create an accountable and functional website, like other Districts, to show this?  Is it time we started looking for a new webmaster?  The current webmaster Mr. Max Pugh is over paid.  He makes over $100,000 and he does not seem to have the technical know how on simple areas.  We believe the use of unfair and dubious online processes without any challenge from anyone, including some Board members, is a cause for alarm.  We have confirmed claims of some Directors receiving kickbacks in certain areas. This is not fair to the children of Prince George’s County Public Schools.  The time for Dr. William Hite to go has come!

Even though we want to see greater transparency and accountability, budget transparency is not a goal in itself. If a budget is built on distorted priorities, and if it does not represent all expenditure, then there may be room for corruption even though the budget data is available. Similarly, a budget that is transparent but not accurate will make public scrutiny impossible and again provide room for corruption. Furthermore, budget transparency is only useful in combination with budget timeliness and accessibility. If data is provided too late, or if information is not made available in a reader-friendly format, the public will not be able to monitor the budget process. Finally, a transparent budget will only be useful if effectively used by the public. Transparency and participation complement each other.

Budget transparency has to be seen as one component of a broader framework of fiscal transparency and public expenditure management. Transparency should be a standard feature of a sound budget system that is built on realistic assumptions. Expenditure management should promote adherence to the budget and allow for public scrutiny. Right now, as things stand in PGCPS under William Hite Jr. EdD, this is not the case.

Our mission is to transform the school system into one that builds on the strengths of young people, families, and communities to ensure children are given the greatest opportunities to grow and thrive.

In addition, we are committed to seeing proper reforms, transparency and accountability issues addressed for the benefit of the stakeholders as well as citizens of Prince George’s County. 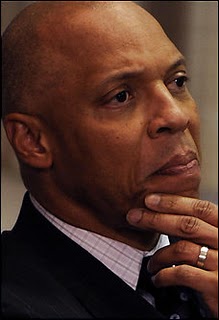 The announcement that Superintendent Dr. William Hite Jr. of Prince George’s County Public Schools (PGCPS) received a Directorship of National PTA Board of Directors is suspicious. We believe that this is a clever ploy to boost his ego after we published an initial  blog.  The announcement came  four days after publication of the second blog.  This is problematic for parents who want to see proper reforms and tough changes in the school system in order to support students, teachers and administrators.  Dr. William Hite Jr. wants to appear that he is doing a good job.  He sits on several boards but he does not have enough time to do what he was hired to do.  Most of the time he is either playing golf or is out in the field doing other activities that are unrelated to the education of our children. This is not fair to those who are stakeholders and citizens of Prince George’s County.  He is not a good superintendent becasue he is not doing the job we have hired him to do. Therefore, he should resign as soon as possible.

Before you decide whether to support the proposed November 4th, 2011  boycott of PGCPS, by not sending your child to school that day, first understand the issues facing these parents.  PGCPS has an approximate graduation rate of 50%.  Shockingly this is not the problem facing parents. The real problem is that 179 schools are rated as PLA.  PLA is a rating given to schools that have persistently breached the public trust and that have completely failed to educate the students who attend them. PLA rated schools have less than a 50% graduation rate. Infact, these schools are factored in with the twenty other non- PLA schools, such as County Honors, to give PGCPS its 50% graduation rate. Note that PGCPS is the second worst performing school District in the whole state of Maryland, barely above Baltimore City public schools.

The problem for many parents, particularly those with lower incomes,  is that they must send their children to a PLA school where the child will receive an inadequate education.  When these parents send their children to a PLA school, they face the stark reality that their children are set up to fail.  This problem is not a recent issue. These schools have failed several generations of students.  Year after year these parents are told that something is being done to address this failure, and they are given a list of what will be done.  Yet, the failure persists with no consequence to those accountable for this failure.  The issue has gotten worse under Superintendent Hite.  Recently, Dr. William Hite Jr., put up a questionable editorial (you can read it here) that claims tremendous progress was achieved last year.  This is contrary to the investigative  reports done by the Gazette newspaper. (Read the report here).

During the budget process hearings this past spring, we attended a board meeting that was coordinated by Superintendent Hite where he undermined several elected officials including senators and delegates, clandestinely, because they dared question his work ethic. We found out that  Superintendent Hite controls almost all the board members.  When the chair of the Board finally called for a vote to confirm the issues following presentations on the PLA problem by the PGCPS Superintendent Hites, they passed the budget without much questioning of his decision.  Local leaders and an auditorium filled with more than 100 Prince George’s County parents were astonished.  The turning point at this meeting for us was when Superintendent Hite suggested that parents are expecting too much and they should settle for children that do not always graduate but rather the standard should be that they are able to pass a GED test.  Hite actually proposed at the meeting to change the standard from expecting their child to graduate to minimally expecting their children be able to pass a GED test and be work force ready.  Hite  is the one primarily accountable for setting the educational standard and developing the plan to address the PLA crises.  These parents’ children are currently trapped in a school system that is led by a person that proposes setting low expectations and does not expect the system to succeed or improve.

Whether you are located in the PGCPS or outside of this area, consider providing support to these parents and the PGCPS’s bold move to boycott.   The boycott is the first step in sending the message that without the children there is no PGCPS and that these parents do have power.  They should expect real corrective and preventive action.  The time for talk and playing the blame game is over.  Parents are vital in the process of reviewing and approving the plan that is proposed and acted on.  The Prince George’s County Council has the power to provide oversight to the Board of Education Budget and to ask tough questions following massive corruption unmasked recently.  There must be accountability and transparency without much delay!

A rally will be held in front of PRINCE GEORGE’S COUNTY ADMINISTRATION BUILDING in Upper Marlboro at noon in the near future (check back here for the date)– be there!

impact of corruption  on economy and especially Prince George’s County:

impact of corruption on state governance: