Reform Sasscer Movement for Prince George’s County “Movement” has established that, law suit filed in Federal court last year, (See details here ~~>asaspunion-complaint) has been dismissed. Many members of ASASP and others within the county system expressed dismay since as it turns out, the suit was more of a cover up than anything else. Following our explicit account almost two years ago, previous President Mr. James Smallwood resigned but then was replaced by his friend Mr. Dwayne Jones who is engaged in the same diabolical conduct at Laurel High School. Mr. James Smallwood still sits in the same Board of Association of Supervisory and Administrative School Personnel (ASASP) and has been calling the shots behind the scenes in retaliation. Mr. Smallwood’s name is not published in ASASP Website in order to deceive members that he is no longer a member of the Board of Directors but he is. Something needs to be done to create a strong accountability mechanism on these guys. On this note, Someone needs to ask them to do the right thing and step aside to allow proper investigations to occur. The above lawsuit appears it was more of a publicity stance and concealment of illegal activities by Dr. William Hite, Ms. Monica Goldson, Mr. James Smallwood and their conspirators committed while in Prince George’s County Public Schools (PGCPS).

The time has come to demand accountability from these same Unions which appear to have lots of money to dupe innocent members while paralyizing the school Disctrict for their own personal motives. We have had enough with the corruption involving unions here in PGCPS and other entities who might be benefiting from the same. The cycle of corruption must be eliminated or minimized somewhat. We therefore should never rest easy.  In our own considered view, the suit was never intended to fix any problems whatsoever other than cover up the bad guys. Enough is enough.

Time has come for new leadership involving ASASP and other Unions in PGCPS engaged in wrongful conduct which includes bribing attorneys in conspiracy with the Thatcher Law Firm and other players. We must demand an end to these shenanigans and other pranks within our PG county system ASAP! We hope the Board members and other government officials will look at the activities of these selfish individuals with a view to making proper changes. We cannot be a butt of all manner of jokes without taking action against the fire!

As articulated before, Corruption flourishes when someone has monopoly power over a good or service; has the discretion to decide how much you get or whether you get any at all, and where transparency and accountability are weak. So, to fight corruption we must reduce monopoly, reduce discretion, and increase transparency in many ways. (see ~~> ~~> Reduce corruption ~~> Audit and Accountability)

Enhancing accountability means many things, and creative leaders use a remarkable variety of methods. One way to improve accountability is to improve the measurement of performance. Leaders can work with their employees and clients to create new systems for measuring the performance of agencies and offices—and then link rewards to results.

Accountability is also increased by inviting outside agencies to audit, monitor, and evaluate.

What about ethics and morality? Successful leaders set a good example. They sometimes create training programs for employees and citizens. Nonetheless, in the success stories I have studied, what might be called “moral initiatives” are not the key feature of the long-term reforms. The keys are systems that provide better incentives for imperfect human beings to perform in the public interest—and to avoid corruption.

When corruption has become systemic, it resembles organized crime. It has its own parallel system of recruitment and hierarchy, of rewards and punishments, of contracts and enforcement. This parallel system has some inherent weaknesses. For example, in no country of the world are bribery and extortion legal. Therefore, they must be kept (somewhat) secret. The money gained must be hidden. One cannot openly recruit new members. The mechanisms for enforcement are illicit.

How can these corrupt systems be subverted? Obviously we cannot count on members of organized crime to clean themselves. Instead, we must analyze the corrupt systems and ask, “How might they be destabilized?” Who is “we”? It can be a new president and his or her team, or a new mayor or head of a public enterprise. But it can also be you and me as members of civil society. Around the world we see new examples of citizen activism, of business groups entering into “integrity pacts,” of intellectuals and journalists and religious leaders going beyond lectures and sermons to analyze corrupt systems and work together to subvert them.

Finally, according the FBI, Public corruption poses a fundamental threat to our national security and way of life. It impacts everything from how well our borders are secured and our neighborhoods protected…to verdicts handed down in courts…to the quality of our roads, schools, and other government services. And it takes a significant toll on our pocketbooks, wasting billions in tax dollars every year.

If you and I are not part of the solution then we are simply part of the problem. ~ Anonymous

Call your elected officials now and request support for Bill PG 411-13. We need this bill in order address  issues of significance concern in Prince George’s County Board of Education. The truth is more mundane, but the issues raised will promote Educational opportunities in PGCPS and protect the majority of the citizens many years to come.

Entitled: Task Force on the Membership and Operation of the Prince George’s County Board of Education PG 411-13

The union for Prince George’s County school principals and administrators has filed a $100 million federal class action lawsuit against the county school board and former schools superintendent William Hite.

The Association of Supervisory and Administrative School Personnel, or ASASP, filed the suit Nov. 2, alleging that school administrators were fired or demoted under Hite due to age and race discrimination.

Reed said black male administrators were singled out during the tenure of Hite, who is also black.

“When we looked at it, older black males had no chance of promotion,” Reed said.

The suit also alleges that during the last reduction in force, board member Donna Hathaway Beck (Dist. 9) met with certain white employees and assured them they would continue to be employed with the school system, regardless of seniority or the RIF plan.

Reed said previous attempts to resolve the issue with the school board failed.

Schools spokesman Briant Coleman said Tuesday that the school system could not comment on the lawsuit, stating, “Prince George’s County Public Schools has not been served with a complaint by ASASP.”

The suit came a little over a week after the school system finalized an agreement with the teacher’s union, providing teachers with their first pay raise in three years.

Pay raise negotiations between the ASASP and the school board are still ongoing, Reed said.

The Prince George’s County Public Schools system is facing a lawsuit from the union that represents the schools’ principals and administrators. According to the published article by NBC News, The Association of Supervisory and Administrative School Personnel, or ASASP, filed a $100 million federal class action suit against the schools and Dr. William Hite Jr  on November 2, 2012.

Dr. William Hite Jr (pictured above)  and the whole saga.

LARGO HIGH SCHOOL TAKE A STAND AGAINST THE BULLYING AND CORRUPTION

We see that Dr. William Hite Jr. has suddenly found a fondness and caring for children. He is appearing on every page in the website with children…. What’s next? Dr. William Hite as a Santa clause giving away Laptops and pencils to disadvantages kids in PG mall?? Please let the wishes come true. With children, a sharp departure from your past antics is most welcome. We applaud his reawaking and a new found central purpose and direction, like the Biblical Saul on his way to Damascus.

Dr. William Hite Jr., we welcome you as a born again if you come clean and confess to your misdeeds, shortcomings and inappropriateness in the past. There is always a second chance and the second act. It’s not too late to repent.

Dr. Hite, listen to the students of Largo High School. Stop the bullying by the administrators of underdogs. What’s next? You are looking good so far… (We hope this is genuine and not a gimmick) … One point for Hite and  five points for the other side. It is still a long way to catch up. Keep it up! 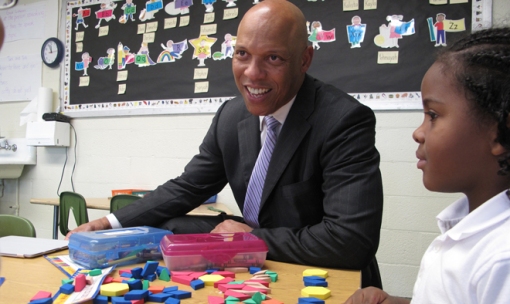