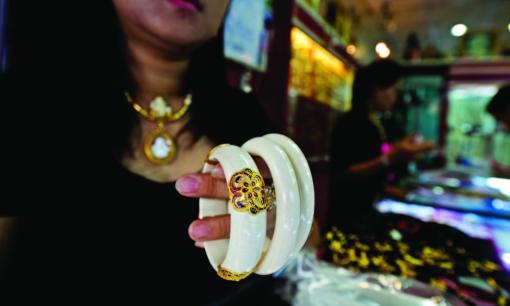 Though Thailand reveres elephants and holds the animals as an important part of national identity, the country remains one of the most problematic worldwide when it comes to the illegal ivory trade.

A new undercover survey of markets in Thailand’s capital Bangkok from January 2013 until May 2014 by TRAFFIC, the wildlife trade monitoring network, revealed:

The report Polishing off the ivory: Surveys of Thailand’s ivory market concludes the vast majority of ivory being sold in Thailand is illegal under international commitments the country made under the Convention on Trade in Endangered Species of Wild Fauna and Flora (CITES). The publication comes just days before a crucial CITES meeting where Thailand will be asked to outline how it has implemented a national plan to end the illegal ivory trade, which was submitted to the Convention last year.

“As the poaching crisis continues to decimate elephant populations across Africa, we cannot afford to turn a blind eye on Thailand’s failure to revise outdated ivory legislation and live up to its international commitments,” said Crawford Allan, senior director at TRAFFIC. “Thailand has had over two decades to do the right thing and it’s past time for them to close legal loopholes that and shut down the illegal ivory trade.”

Last year, WWF delivered a global petition with nearly 1.6 million signatures to the Thai government urging leaders to shut down the ivory market. But despite a public commitment to action, little progress has been made.

A 75-year-old law permits the legal trade of ivory from domesticated Asian elephants in Thailand, often from the ivory left after captive elephants’ tusks are trimmed. But with no registration system in place, the government cannot trace the ivory. This makes it easier for ivory from illegal sources to enter the market place. The report shows the amount of ivory for sale in Thailand far exceeds the amount that could possibly come from domestic elephants. And since 2008, more than 13 tons of African elephant ivory have been seized in Thailand.

Tens of thousands of African elephants are slaughtered each year for their ivory to meet the heavy demand from Asia. Transnational organized criminal gangs are believed to be behind much of the trafficking.

TRAFFIC and WWF are working closely together to stop wildlife crime. We are applying the strength of our worldwide networks, our influence with partners and governments, and the passion of our supporters to end a crisis that is threatening to undo years of conservation progress.

You can help. Sign on to stop wildlife crime. 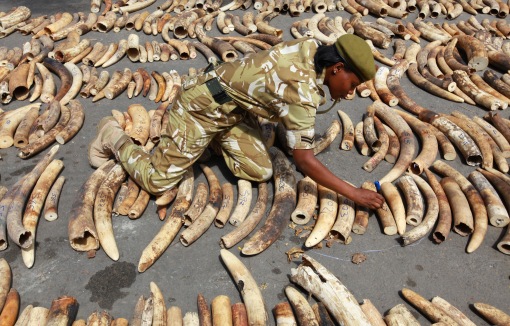 Boycott ivory products such as these ones pictured here and help save the Elephant and the Rhino.

A car covered with carved ivory. How many elephants died for this?