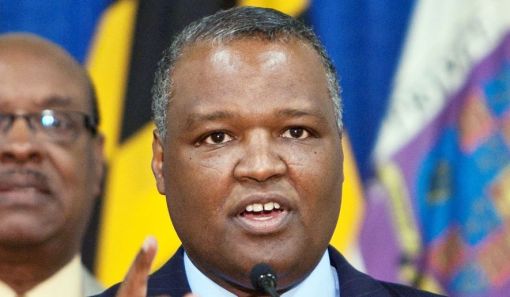 Prince George’s County Executive Rushern L. Baker III is weighing another run for office. This time it’s the race for governor of Maryland.

Mr. Baker cannot seek re-election to his present post because of the county’s term limits. Indeed, he twice sought the county executive seat and twice lost to Jack Johnson.

In fact, Mr. Baker won the seat in 2010 only after Johnson became embroiled in — and later pleaded guilty to — public corruption charges.

Mr. Baker has pushed for the right to hold on to his current job. In 2014, the same year he won re-election, Prince George’s voters rejected a measure that would have allowed the county executive and council members to serve three four-year terms. It was the third time since the 1990s that voters maintained their hard line against expanding terms.

Mr. Baker, a staunch Democrat, now says he and his family will consider a possible challenge to popular GOP Gov. Larry Hogan, telling The Washington Post this week that a decision won’t come until after the November presidential election. (He’s with Hillary, of course.)

“I don’t base [my decision] on what the political climate is,” Mr. Baker said. “It’s whether I think I can do a good job and whether it is right for me and my family at that time — and if I can get the things done that I want to do.”

Having also served nearly a decade in the Maryland House of Delegates beginning in 1994, it’s clear that Mr. Bakerlikes elective politics and politicking. What’s not so clear, however, is that Mr. Baker has a clear vision of the needs of public education in his county, which is in more turmoil now than during the fierce busing desegregation battles of the 1970s. And much of the tension stems from Mr. Baker’s move to take over administration of the troubled system and run it himself.

The school system leadership vacuum stems from the decision by the state to honor Mr. Baker’s request to take the reins a few years back. This year alone, parents, students and teachers have had to deal with child and sex abuse allegations, with some of those allegations involving the troubled Head Start program and special-needs students.

This week, another scandal broke in the news — a cover-up within the school hierarchy. The chief of staff of Mr. Baker’s handpicked superintendent was forced out this week.

The most pressing consideration here is timing. For one thing, there’s the tick-tick-tick of the term-limits clock. Then there’s this economic development project called MGM National Harbor that is expected to open in December. A monster gambling/hotel/entertainment/dining/retail venue, the MGM National Harbor will rival anything in the Washington region, and Mr. Baker has a lot riding personally on its success. When the doors open, you won’t have to gamble on whether Mr. Baker will be all grits and grins, since the project was snagged during his watch.

But one could still question whether his gubernatorial gambit is a distraction, political cover, so to speak. After all, public schooling has always been a key issue in Mr. Baker’s arsenal. He offers a taste of his pitch on his RushernBaker.com website: “His scholastic achievements represented a triumph over early struggles with reading, a success made possible by the tenacity and support of his family and teachers. Rushern, an active reader and accomplished lawyer, has remained a steadfast advocate of the importance of teachers and education throughout his career.”

Would candidate Baker — or Gov. Baker — remain such a steadfast advocate?

For sure, however, Mr. Baker needs to take a lead on the home front, where parents, and local and state leaders are questioning whether he has a firm grip on the education reins.

Prince George’s families and voters have a right to expect Mr. Baker will be their chief and primary advocate. Pronto.

Politics and politicking be damned.

• Deborah Simmons can be contacted at dsimmons@washingtontimes.com.