When you hear the name ‘Zulu People’ what do you think their personality would be like? Just like their name, they are friendly and always hospitable. The Zulu people, whose name means ‘people of heaven,’ are a proud tribe. This group is the largest ethnic group in South Africa, as it has approximately 10-11 million people, spread out all over Southern Africa including Zambia, Mozambique, and Zimbabwe. Their official language is the Bantu language, often called isiZulu (Zulu) language. isiZulu is a member of the “Nguni” language group, and is most closely related to isiXhosa, isiNdebele and SiSwati.

The Zulu people’s culture is very colorful and fascinating. To these people, etiquette is very important. Many Zulus do a handshake to greet each other, and also to show respect for each other. First, they start with the conventional shake, then clasping thumbs around thumbs and finally another conventional handshake.

When a family walks together, there is an order. The man of the family comes first. Then the wife comes second, children trailing after, boys before girls. In case of encountering another man, the two men pass on their left enabling both to see the other’s weapons.

When villagers drink beer, they are expected to sit down and eat. The women brew beer every couple of days. When somebody refuses the beer, it is rude. Rubbing the stomach compliments the brewer. Respect is always important, especially to the inkosi, the chief. Eye contact is considered to be disrespectful and is avoided, especially between women and men.

Clothing is important too, as it tells other if one is married or not. Men wear animal skin trousers, with fur or tassel on the bottom, depending on the weather. A married man would be given a headband to wear. Unmarried women are very vain and proud of their body. Engaged women would cover their chests, to respect her husband-to-be and his family. Married women would cover their entire body to show they belong to a man. The chief’s family or important people wear leopard skin.

We hope this article enlightens and clarifies a few aspects of African culture in a series of among other articles we plan to publish in the future concerning citizens of the world.

The Zulu men are known as warriors and are fierce fighters especially in defending their land and cattle. In Zulu society, social gatherings almost always involve dancing. Most Zulu native dances require a high degree of physical fitness and a lack of inhibition. 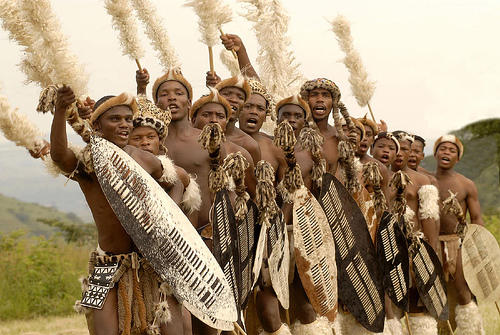 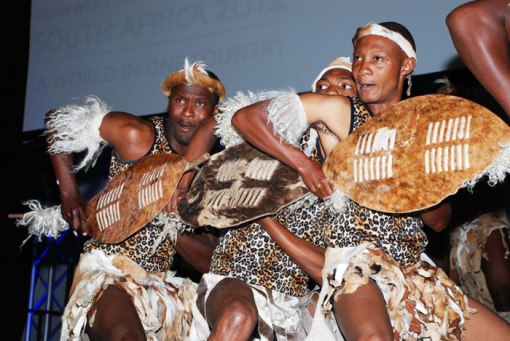 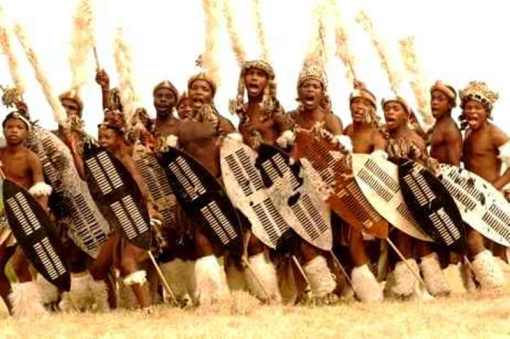 Zulu weapons traditionally were spears and later short spears were used plus the traditional leather shields. Today most men carry wooden staffs and clubs to prevent injuries and death if tempers flare at political meetings and rallies, which they often do. 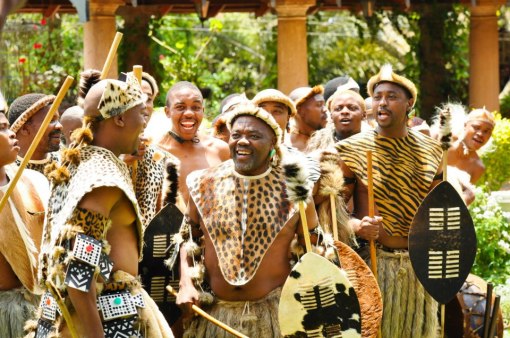 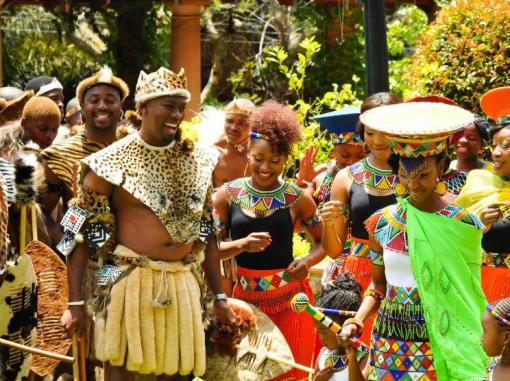 Villages are not necessarily located near water and water may have to be carried daily long distances from the source back to the village and is carried by the women in pottery jogs balanced on the top of their heads. Zulu women wear a straw ring on the top of their heads to protect it while carrying the heavy water jugs as you can see from the pictures. Unmarried women wear hats without a crown and, after a woman is married, the crown is usually added to the hat. She never takes her hat off and some cases sleep with her neck supported by a wooden “stool.” 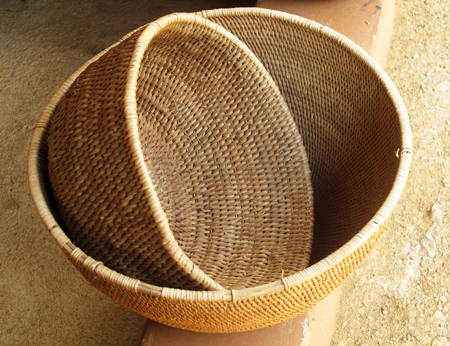 Zulu people are renowned weavers and they make colorful beadwork. Baskets and mats are woven from palm fronds and grasses and are very decorative and popular. Most baskets display the traditional diamond or triangle shape, symbols representing female and male elements. Shiny glass beads introduced by the early 19th century traders traded a new custom. Now, artistic beadwork forms an important part of Zulu culture. Every pattern and color has symbolic significance. 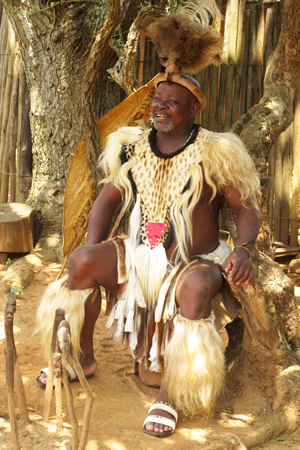 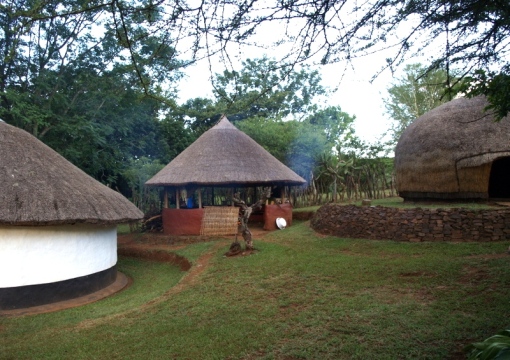 Another extended family homestead. In the foreground is the cattle enclosure, or kraal, the cattle have already been driven out to graze. 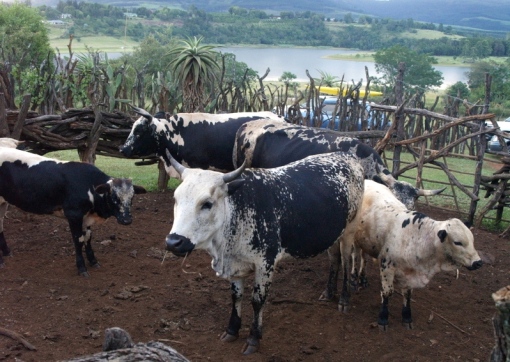 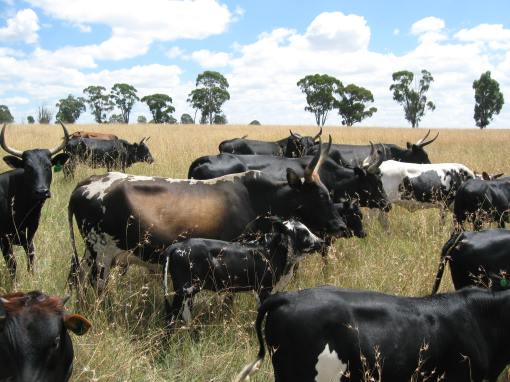 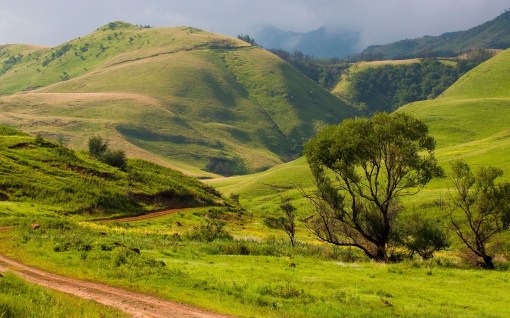 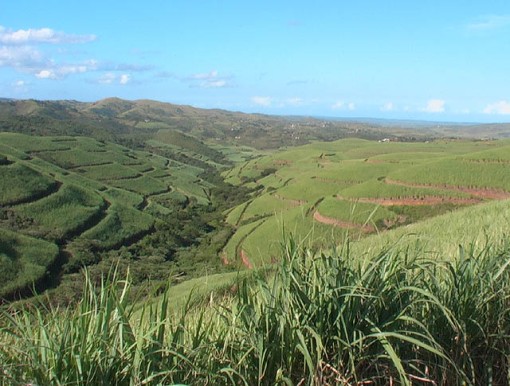 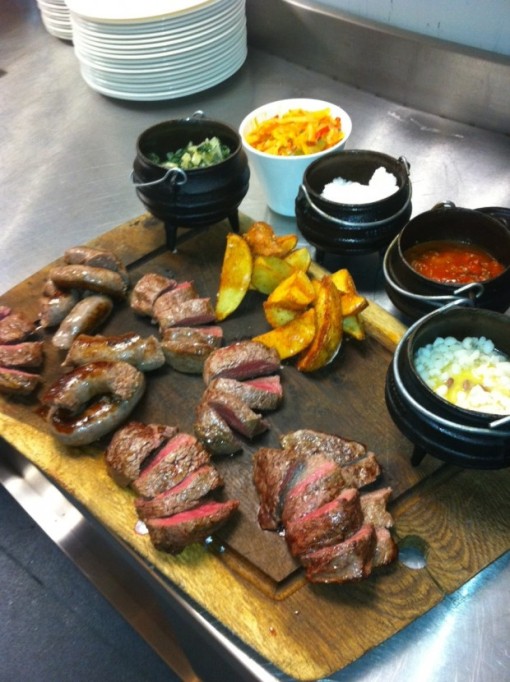 A map showing the (very) approximate geographical area of South Africa where isiZulu (Zulu) is spoken (indicated in blue). There are also a number of speakers in Gauteng, parts of Zambia, Mozambique, and Zimbabwe due to migration.